This article regarding the use of "witness marks" during the manufacture, installation and re-barreling of Luger pistols was researched and authored my member Dwight Gruber who has granted permission for it to be posted permanently for reference on the Lugerforum.

INTRODUCTION
A while back somebody posted that on the Lugerforum that in his opinion Luger barrels had been "messed with" much more than we think, that many of the Lugers which we accept as all-original have undergone re-barreling over their lifetime of hard use. This assertion bothered me, and I began to wonder how it could be tested.
Over several months I closely examined the barrels of my own Lugers. The nature of the witness marks made me question in my own mind the authenticity of the barrels on some of my collection, and I corresponded with other collectors to explore the topic--a feeling of misgiving, without particular direction.
A recent discussion on the Lugerforum began with this post by collector Tom Armstrong (quoted by permission):
"Am in Louisville KY attending SOS and Gunday shows. At the Gunday show yesterday I scored a very nice KM rig, a 1940 dated Code 42, in about 97% condition, Ost See pantograph marked with one matching mag, an armorer's code 42 mag and a code 42 tool, all in a lovely Curt Vogel 1939 dated KM holster. I was one happy camper. The sheep-dip nature of the show -crowded beyond belief-precluded my doing my normal disassembly inspection prior to purchase, so I just gave the markings a peek with my loupe and went for it. It was a little pricey but what the hell.
"After dinner, several members of the forum and I were having after dinner drinks when one of the guys took the piece apart. His voice registered dismay when he said, 'Look, the witness marks do not align and the barrel does not have a letter suffix.'
"Well, I thought I had been taken.
"This morning, I went back to the show, prepared to have a bit of a chin-wag with the dealer who had sold me this bogus gun.
"Fortunately, there were very few people in the hall at the time and I could easily get to Bob Simpson's booth. I showed the piece to Bob, pointed out the "problems" and asked his opinion.
"Bob explained to me that the witness marks were placed on the barrel and frame BEFORE the front sight block was machined out of the barrel stock and then the barrel was removed from the frame for further machining, polishing and finishing. After this, the barrel was reinstalled and quite frequently the witness marks would be improperly aligned. In short, this was nothing to worry about and was not an indication of a buggered gun.

Likewise, he remarked that he has seen many, many III Reich era lugers that lacked the barrel suffix.

"In short, it was a righteous gun.
"I learned something new as a result and avoided a certain to have been unpleasant conversation.
"My public thanks to Bob and I guess no matter how much we learn about our toggle-tops, we will never know it all."
This gelled several questions in my mind, and began the avalanche of witness mark posts over two Luger discussion forums.
THE WITNESS MARK
"Witness mark" is a term without a precise meaning. In fact, research reveals that nowhere is it used formally in the machinists' trades. It is used on an ad-hoc basis to describe all manner of alignments and evidence of wear. I will continue to use it here as it is the commonly recognized term for the topic at hand.
Over the course of the discussion many interesting and imaginative uses and reasons for Luger witness marks were proposed. However, the "Markings Applied to Pistols 08, 1910" (including amendments through 1914) state--(1)
"Pistols, finished as follows:
26a pistol ready for power-proof and shooting-in:
...
*Barrel and front sight: after sight adjustment, a chisel mark, 3 to 4mm high, of equal length on both parts.
*Barrel and receiver: after sight adjustment, a chisel mark, 3 to 4mm high, of equal length on both parts."
The illustration which accompanies the instructions show this very clearly (but very small) as the "witness mark".
Intuitively, then, witness marks should appear as a single strike and line up perfectly. An examination of real guns reveals that some of them are an uncomfortable fit with intuition and specification. The guns pictured provide a broad overview of witness marks, both of unmodified guns and re-barrels.

Example 04--S/42 1936. Not perfectly aligned, all other evidence points to the barrel being original.

Example 07--1917 Navy. Two strikes, misaligned by less than 1/4 line width. All other evidence points to the barrel being original. 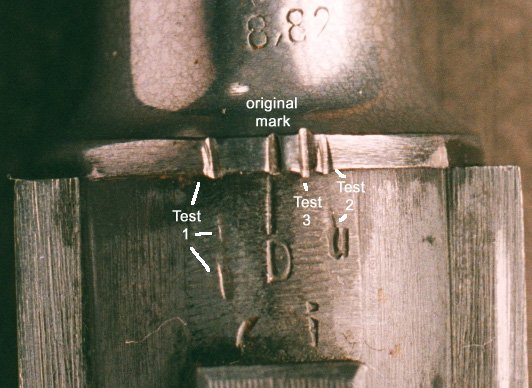 LUGER BARRELS
Many imaginative theories for the fabrication of Luger barrels, such as the one which appears at the start of this report, have been advanced; and the subject has proved to be controversial. A contemporary description of how Lugers were manufactured (at least, in English), or photographs of the process, have not been forthcoming until now.
The reminiscence of a Czech forced-laborer in the Mauser factory has provided the definitive steps of P-08 barrel manufacture. This individual worked in "Lauffertigung" (barrel production) as a tool setter. He remembers the barrel was made from round steel rod, the operation sequence was:
1. Rod cut to length;
2. Barrel rod bored through its length and then reamed;
3. Outer surface turned on a lathe;
4. Front sight base milled;
5. Main thread milled.
The barrels in the white, unnumbered, unmarked, with no rifling or chamber, were sent on to another stage(2).
Barrel replacement is one of the repairs which could be undertaken by military armorers on behalf of a Luger, with implications for the witness mark question. Imaginative theories were discussed including the possibility of field armorer replacement.
Joachim Görtz, in a past issue of Automag, provided translation of the army list of repair parts available to unit armorers. Barrels and receivers were not even available at this level; he mentions a footnote which specifies replacement of these parts be carried out in the repair shop of the relevant Field Equipment Office (Herres-Zeugamt)(3).
The Instructions presented by Görtz & Bryans include power-proofing procedures for barrel/receiver/breechblock replacement; the procedures imply that proof stamping would carried out as for a new pistol(4). Since the witness mark stamp was required immediately preceding power-proof, logic implies that this would have been applied to the new barrel or receiver when they were mated up to the corresponding part.
Görtz (in Automag) notes that the pistol would also be stamped by the particular Zeugamt's designator (HzA stamp).
CONCLUSIONS AND MORE QUESTIONS
A conclusion or two may be drawn from the discussion, but it leaves many more questions than answers.
A perfect witness mark can be a strong, perhaps even primary, indicator that a Luger barrel is authentic and original to the gun. The survey sample demonstrates that one should not automatically expect to find a perfect witness mark on any individual Luger. Witness marks which are not perfect cannot by themselves indicate anything about the originality or authenticity of the barrel/receiver combination. In general, the finish, signs of aging, and details of machining and markings are of more importance in determining boosted or faked Lugers, as it has always been.
The question is still open as to what misaligned witness marks actually reveal. The discussion presented a number of possibilities:
1. Slight alignment difference, but same mark:
-Slight twisting of barrel.
-Barrel was removed and refitted.
2. Witness marks on barrel and receiver differ:
-Replaced barrel.
-Replaced receiver.
3. No witness mark on barrel and receiver:
-Produced that way
4. No witness mark on one, but witness mark on other.
-Replaced barrel.
-Replaced receiver.
This still begs the question which started the whole topic: have Lugers been re-barreled more often than we tend to consider?
Late in the discussion evidence was discovered which sheds light on this question. It gives a firm answer to one circumstance, and may point a direction for further exploration. August Weiss, director of all handgun production for Mauser during WWII (and a manager at DWM before that) is quoted in  "German Small Arms Markings"(5):
"Thousands of pistol barrels, having passed all inspection by means of gauges and the bores of which had been checked by a high-power magnifying glass, were rejected by [the inspectors] after power proof..., had to be screwed out of receivers, and were scrapped."
So, in the case of thousands of WWII Lugers, at least, we have: pistols whose witness marks will be two marks and may not precisely align; pistols which have been patently rebarrelled; and re-barreling which is at the same time completely authentic to the pistol. This may explain the unusual characteristics of the barrel marking of example 04 (and makes me feel much better about it). 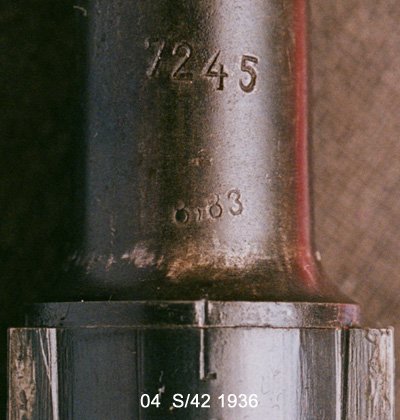 Herr Weiss's comment begs the question of what other manufacturing practices might result in re-barreling, with the resultant implications for the witness marks which we find on our Lugers today. We can only wonder whether inspection at DWM and Erfurt in WWI, and Simson and Krieghoff, might have resulted in similar activity; and we must not forget about Waffenfabrik Bern.
The term "Arsenal refinish" is thrown around pretty casually in describing Lugers. What is an "Arsenal refinish"? Might it have included re-barreling?
"Police rework" is another imprecise term. When did Police conversion include re-barreling of Lugers? Are there documents specifying Police conversion requirements, or reporting on conversion practices?
Answers to these questions must be floating around. The more information which can be dredged up about re-barreling practices (particularly about how they are marked), the more the witness mark may be "honed in" as a useful adjunct to identify legitimate vs. re-barreled, faked, or boosted Lugers. It is equally possible, of course, that the information may show witness marks to be totally useless in this respect; this in itself would be useful to know.
That being said, there are some specific pistol types whose characteristics are of interest even though potentially re-barreled. Inter-war Commercial Lugers (both rework and new manufacture); all Police models (both rework and new manufacture); and all Dutch and Finnish Lugers are of particular interest.
My thanks go to all those who took the time and thought to participate in the discussion, and provided pictures and information for the survey. Particular thanks goes to Jan C. Still, for examining and reporting a huge sample of witness marks, and for the leap of insight which forms the basis for the descriptive quantification of the examples. Thanks also goes to Heinz Ahlers for clear and concise thinking, and for pointing out the August Weiss comment, hidden in plain sight.
--Dwight Gruber
References: